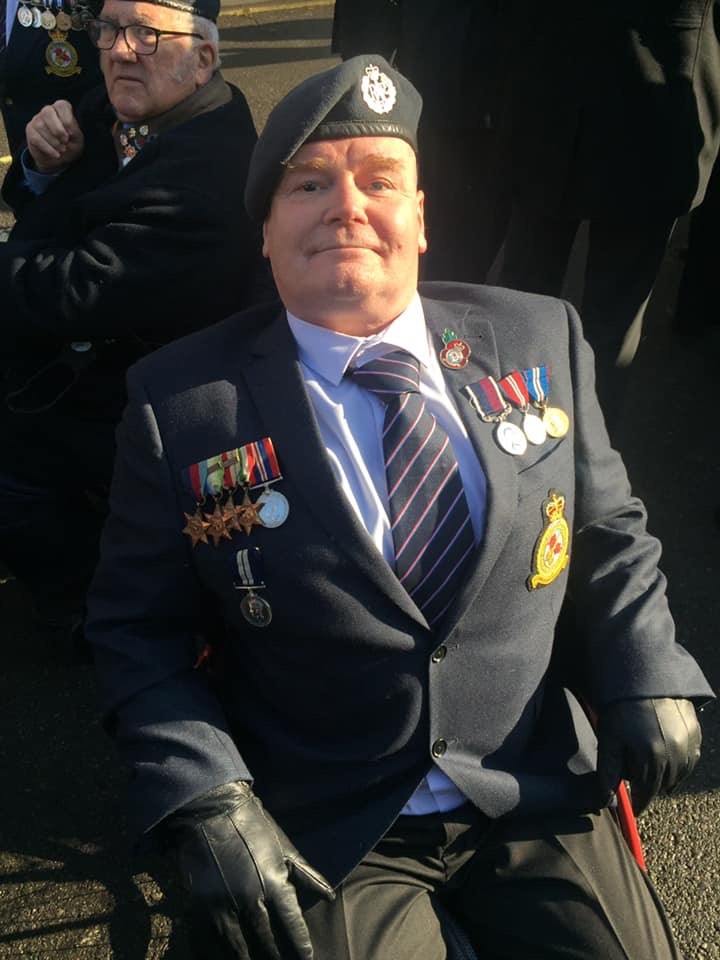 We are very proud of Keith and the contribution made by all the other military and civilian servicemen and women who fought and continue to fight for our freedoms.

Read Keith’s moving words about his time in London for the Remembrance Sunday Parade below:

“I am a 55 year old guy originating from Edinburgh and spent 23 years of my life in the Royal Air Force as a firefighter. I left the RAF when I was 40 years old. My priorities had changed and it was time to settle into a quiter life with my wife and young daughter. We chose Blackpool and purchased a small guest house to run as a family business. We soon found that our income was lower than in the RAF so I, through necessity, found a new job as a prison officer. Life was nice and settled, running our business and working for the Prison Service. We made many new friends and enjoyed a wide and varied social life.

“This life, we had made for ourselves was to change quite dramatically at the age of 49. I took a tumble down the stairs at home, sustaining a traumatic brain injury. I was rushed to hospital and was in a coma for 6 weeks. This had a profound effect on my family and I. I was left with various injuries such as loss of balance meaning I had to use a wheelchair. A loss of hearing in my left ear, loss of smell, difficulty with speech and double vision. This can be very frustrating at times and finds me very short tempered. I have maintained many friendships and accumulated some greatfriends throughout my life so was very honoured to be invited down to the Cenotaph to take part in the Remembrance Day March.

“I admit that through my injury, my self confidence took a big hit. Now I was to take part in a March that would see me meet up with friends I knew from my Air Force days. I admit that were it not for Headway Blackpool and the people around me, I would never have had the confidence to attend such an occasion. But some six years after my tumble the thought of not attending never crossed my mind.

“Now for the logistics, this wasn’t going to be easy. My carer Steve used to live in Watford and his mum lives there. He called her, explained the situation and she gladly invited us to stop with her on the Saturday night. We travelled to Watford the day before the parade, stopping with Steve’s mum. In the morning (bloody 6am!!) we drove to Stanmore and boarded the tube into the centre of London. We went for a cup of coffee at a pub (first time for everything). After our coffee we then went to Horse Guards Parade to meet up with the other firefighters who were marching. We had to cross a few street barriers such was security and the London Met where so helpful, moving barriers for us and ensuring we had a clear passage to Horse Guards. We then met up with friends old and new waiting to march and show our respect to the many who gave their lives for our freedom.

“The amount of waiting around is bloody awful, we stood there from 9 am until 11 am then marched towards the Cenotaph. About a quarter mile from it we stopped again and the service and wreath laying began. Then around an hour later we marched towards the Cenotaph. We all payed our respects and took the salute. I must admit I smiled at Steve, who has not an ounce of military in him having to march!

“We all arranged to go to the pub afterwards and catch up but we, sadly, couldn’t stay. We had to get back as we had a full day of travelling ahead of us. We went to the tube station where we were taken straight through the passenger gate and told we would not be paying for the tube ( thanks London Tubes!). We got back home safely and I have been invited back next year. This is something I will gladly be attending again. RESPECT.”